All three finalists in each of the 12 categories will be invited to the Shoalhaven Superheroes Volunteer “Service & Beyond” Gala Dinner on Friday 3rd September at the Country Club, St Georges Basin. The Volunteer Awards finalists and sponsors are also invited to the Shoalhaven Superheroes Speaker’s Garden Volunteers Recognition Reception at Parliament House, Sydney, in October. 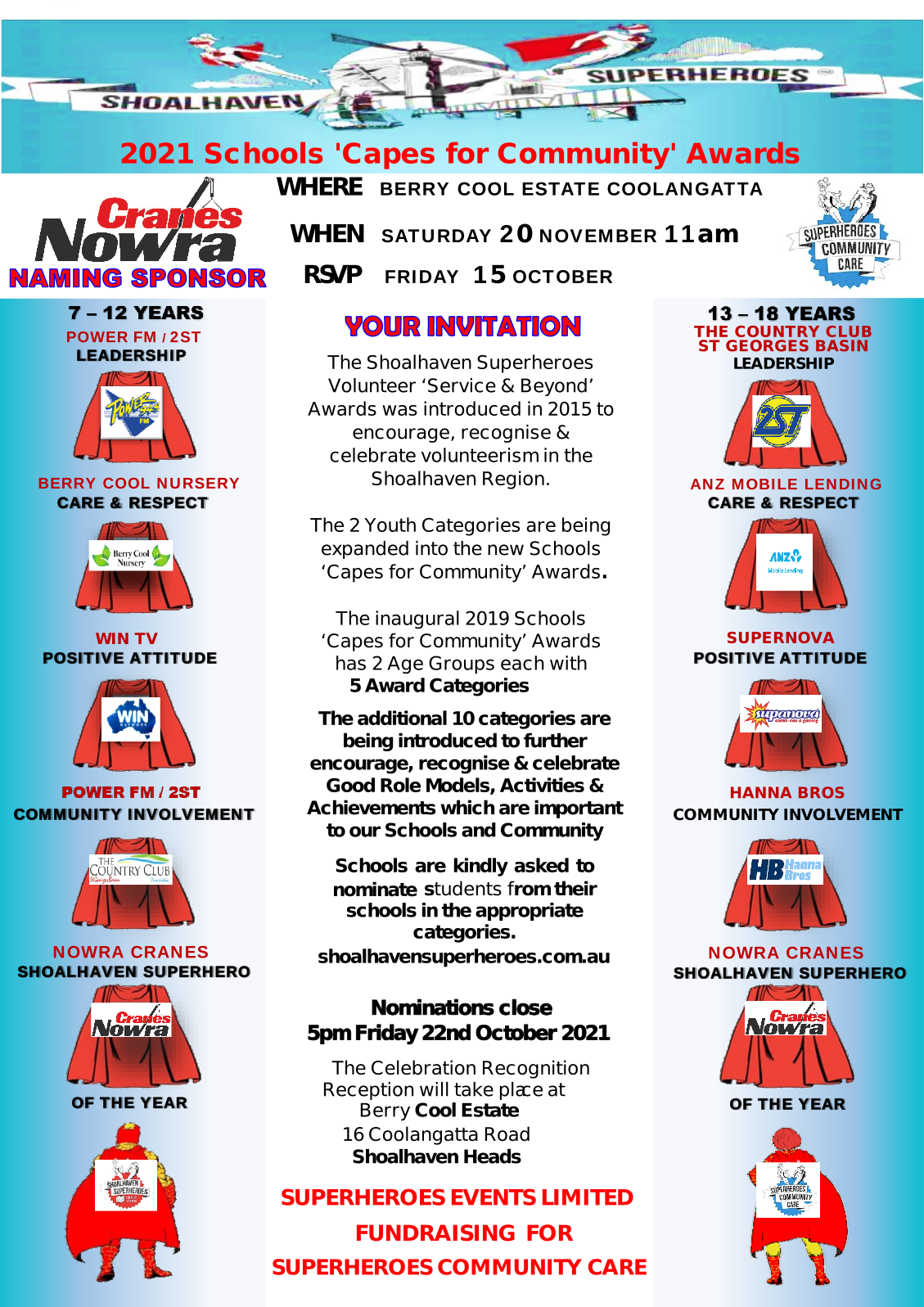 Vicki’s personal philosophy is “I believe everyone can achieve what they want, as long as they believe in themselves”.

Vicki has been a volunteer and fundraiser for manu local Shoalhaven Heads causes, and has been a Volunteer Direct of Superheroes Events Limited since 2016. Vicki is an active member of both Shoalhaven Superheroes volunteer teams. She is also SEL’s Ambassador of Fun, and organiser of our team “superheroes” dress up arrangement at our fundraising events and activities. She also stages the very popular “superheroes” Zumba performances at SEL’s events and visits to schools in the Shoalhaven and Illawarra, with the PowerFM School Breakfast Shows.

David is an established business owner in Berry, NSW. David is married lives together with his wife Phillipa in the Shoalhaven.

In November 2014, David established Superheroes Events Ltd, and has volunteered his time to develop a vision that is the unique pop culture Shoalhaven Superheroes Festival, bringing it to the reality it is today.

SEL is the SSF organiser, with the Mission of making the Shoalhaven the Superheroes Capital of NSW/Australia, through creating fictional pop culture POP Worlds, and unique pop culture events and activities.

SEL has already pioneered not only Australian pop culture firsts, but also world-first achievements. SEL is a volunteer not-for-profit company, and David is a Volunteer Director.

Six years since inception, having previously fundraised for other charities and community causes, SEL has evolved and has now reached the exciting stage of applying to ASIC and ACNC to change its legal structure to becoming a Charity, Public Benevolent Institution with Deductible Gift Recipient Status.

This structure change will substantially enhance SEL’s own Charity plans, and the company’s Superheroes Community Care (SCC) and Shack Shoalhaven Superheroes River Retreat (River Retreat) with the opportunity to manage and provide short-stay accommodation for families with chronically ill kids and/or families requiring benevolent assistance. The River Retreat is situated on the beautiful Shoalhaven River at Shoalhaven Heads, NSW.

David’s roles included being the sole negotiator for over 30 Corporate and Community Alliances, and raising over $5 million in sponsorship and securing Program Patrons;

David’s other achievements include;